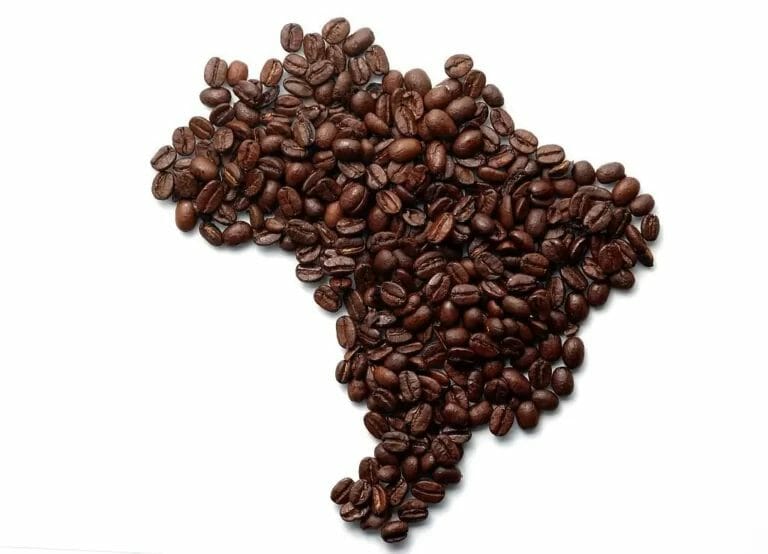 Today, we’re going to learn about it all. First, let’s take a detailed look at Brazilian coffee. But first, it’s storytime!

Would you believe the arrival of coffee in Brazil is a love story, with a bit of spy action thrown into the mix?

According to the story, coffee came From French Guiana to Brazil in 1727. The person who brought coffee in was a Portuguese colonialist, Lt. Col. Francisco del Melo Palheta.

The Guaianese’s governor was strict about shipping coffee overseas, and their coffee was their prized possession back in the 18th century. So when all of Francisco’s multiple efforts failed, he seduced the governor’s wife and convinced her to help him smuggle the seeds across the border.

After acquiring the beans, he put them inside a bouquet of flowers and successfully smuggled them into Brazil. Francis planted the first coffee trees in Para of Northeastern Brazil. The popularity spread quickly, as coffee crops were being grown as far as Rio De Janeiro back in 1770.

The primary customer for the bean coffee was European colonists. But soon, demand kept going up more and more in Europe and the United States.

1802 was the most influential year for Brazil in terms of exports. By 1820, Brazil became the largest coffee-producing country by producing 30% of the entire world’s coffee.

Unfortunately, the entire Asian coffee industry was hit hard with coffee rust disease around the mid to late 1800s. While it ruined Asian coffee productions, it gave Central America, North America, and South American coffee farmers a second wind. By the 1910s, Brazil was steadily producing 80% of the world’s coffee.

Even when other countries recovered from the pandemic and started producing more coffee, they still couldn’t dethrone Brazil as the world’s largest producer of coffee.

In the early 1990s, Brazil deregulated the entire coffee industry, which gave the coffee farmers from the largest farms more freedom to experiment with production, marketing, and even sales.

The deregulation also opened the way to allow more experiments and research on unique coffee processing techniques, which made sure that Brazil’s position of largest coffee producer stayed constant. And it succeeded.

Even to this day, Brazil produces 30% of the world’s coffee supply and is the world’s largest coffee-producing country.

The 7 notable regions for growing coffee in Brazil are:

The coffee region of Sul de Minas is considered “the heart of Brazil’s coffee industry.” The coffee production here started centuries ago and is mainly done in a traditional manner.

Coffee from this region has a raw sweetness that resembles sugarcane. The aftertaste has a bit of limelike acidity.

Coffee produced in Cerrado Mineiro is famous for having a chocolaty caramel flavor with nutty flavor tones. The acidity in the coffee is mild and citric, and the coffee has a full body.

Like Cerrado Mineiro, coffee from this region has citric acidity and aroma, with sweet chocolate notes and a sweet hazelnut taste. The only difference is that it has a medium body, and the aroma has floral notes.

The coffee from this region is bright, clean, and sweet. The coffee offers crisp acidity with a sweet aftertaste.

This region’s coffee has a creamy body that offers a bittersweet chocolate taste with citric flavor.

Coffee from this region, along with Conlon Capixaba, is more complex. The aroma has a mix of floral and fruity aroma. The flavor profile resembles different stone fruits with a blend of citrus with a sweet aftertaste that lingers for a while.

Have you ever heard about coffee bean belt?

If you are interested to explore, read out our coffee bean belt article.

Brazilian blend coffee mixes a few Arabica bean varieties that produce a rich coffee with a smooth and creamy blend. To understand the flavor profile, you need to know how each type of bean tastes on its own. But all by itself, Brazilian coffee is just a bold, heavy-bodied, single-origin coffee.

These are the 4 major Brazilian bean types that make up the coffee culture. But only one of these quality beans is of a single origin, while the rest are hybrids. There are Robusta beans in the mix, as well as Arabica beans.

Cactus is the original one of the four and an Arabica coffee bean type. These coffee beans offer a sweet coffee with a bourbon-based flavor.

The first of the three hybrids is a mix of Bourbon and typical plants. Novo Mundo is highly resistant to coffee plant diseases and offers a sweet coffee with low acidity.

Obata is another hybrid coffee that is unique with a long lineage. Obata beans get you a cup of coffee that tastes like honey and has subtle floral hints with a mellow taste and fruity notes.

The lovechild of Robusta and Bourbon Vermelho, Icatu is the most interesting one of these four bean types. Coffee made from Icatu beans has a distinct flavor of a mix of maple syrup, malt, and chocolate.

As long as you grind the coffee beans the right way, you can enjoy your coffee no matter the brewing method.

However, we recommend the following three brewing methods for Brazilian coffee beans.

The espresso method forces water through coffee grounds and passes the water through a filter to create a cup of coffee. The water pressure brings out the sweetness and chocolaty flavor of the brew.

The French press method is the best for brewing coffees with a heavy body and low acidity.

In the case of Brazilian coffee beans, the French press offers a creamy cup of coffee that has chocolate notes and sweetness in the flavor.

If you really want to bring the most flavor out of Brazilian coffee and have a lot of patience, cold brew is the best way to do so. The water extraction of flavor over long hours can help you extract every last bit of flavor Brazilian coffee has to offer.

The best part about making cold brew with Brazilian coffee is that other coffees taste bitter when put through the cold brew method.

Since Brazilian coffee naturally has a smooth and sweet flavor, a cold brew made from Brazilian coffee can actually be sweet and refreshing. So now you know which should be your go-to summertime refreshment drink.

There’s another blessed bean in this very earth. Read out our what is kona coffee? article.

Here are 5 astonishing facts about Brazilian coffee to top it all off.

A fact that is very surprising, considering the history of Brazil’s coffee production.

In the 1800s, the coffee barons who controlled the coffee plantations were just the worst. Almost all of these plantations had slaves laboring away for profit of coffee at cheap or free labor.

Barons received a hit when slavery was abolished in 1888, which caused many workers to strike back and refuse to toil away with no reasonable pay. The second hit came in the form of The Great Depression in 1930.

Brazil’s hold on the international coffee market is remarkably strong even after all that. If there’s a drought in Brazil, it’ll lead to price hikes for coffee markets around the whole world.

Brazil produces an insane amount of coffee, so many coffee aficionados think that Brazil only focuses on quality, not quantity. For that reason, many go to Brazil only to source beans for Espresso from lack of faith over others.

And despite that belief, Brazil has repeatedly surprised coffee lovers by producing specialty-grade coffee.

Many feel underwhelmed by the low acidic first sip of the coffee. But a second sip is what truly brings out all the flavors you wanted all along.

With all the variations available, I’m sure you’ll find something that suits you.

Most Brazilian coffee beans are processed naturally, which adds complexity to the coffee’s flavor profile. However, Brazil’s climate also is a perfect element for natural processing, and the single-origin coffee resulting from these beans is considered a specialty.

Brazil goes through a highly complicated classification process to make sure they export the best beans worldwide. These coffee beans are sorted via screen sorting, color sorting, and cupping test in coffee farms.

Had fun to know about Brazilian coffee, right?

Then, you will love to read our coffee-producing countries article.

Brazil is not just at the top of the production chain. When it comes to the flavor profile of the coffee that Brazil produces, you will be surprised at the variety and depth of different coffee flavors.

If you haven’t tried out Brazilian coffee yet, I suggest getting your hands on a bag as soon as possible. If you already have, enjoy your coffee.

What’re the Benefits of Being a “Blend” Coffee?

A blended coffee can offer a multitude of flavors that many regular coffees fail to provide. If blended right, it can also be considered a specialty.

What Is Brazilian Coffee Really Known For?

Currently, Brazilian coffee is mostly popular for its Espresso, even when the coffee has a wide range of flavor profiles.

What Is the Best Brewing Method for Brazilian Coffee?

The Espresso maker method is the most suitable for Brazilian coffee since these beans are processed with Espresso in mind.

Brazil grows most of its coffee in warm environments and at a lower altitude.

Everything About Kenyan Coffee You Should Know