It’s very easy for kids to take an interest in coffee or caffeinated drinks. But, unfortunately, you’ve probably caught your kid trying to sip on your coffee and act like an adult. But, should kids … 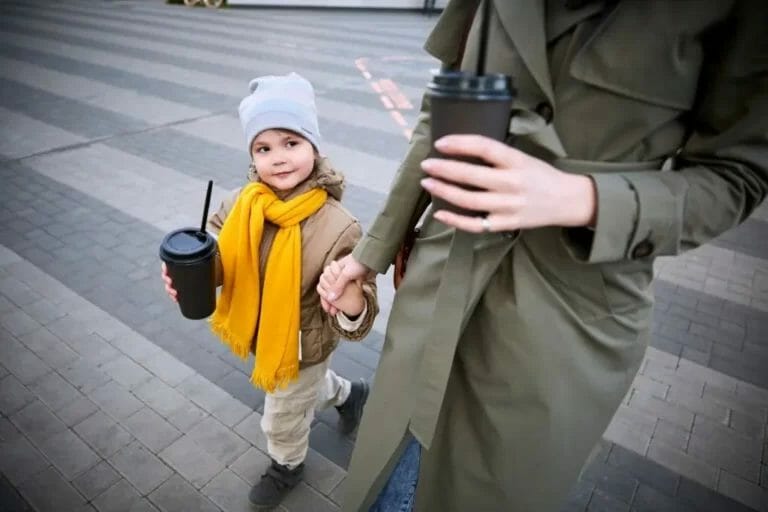 It’s very easy for kids to take an interest in coffee or caffeinated drinks. But, unfortunately, you’ve probably caught your kid trying to sip on your coffee and act like an adult. But, should kids drink coffee? Let’s start by saying they should not and explain why right away.

Relation Of Age And Coffee Among Children (Should Kids Drink Coffee?)

A rule of thumb is not to allow your children to drink coffee if they’re under 15. But yes, if the consumption isn’t regular, it’s okay.

It’s more about the caffeine and less about the coffee that’s the concern here. But there’s a safety guideline that mentions the safe limit of caffeine consumption. The guideline was issued by John Hopkins, Medicine, the American Academy of Pediatrics.

Caffeine affects children in more ways than one, and the effects are a lot more different than how adults face them.

However, the effect doesn’t just come from the caffeine in coffee. You can also find them in:

Caffeine stays in the human body for up to eight hours. So when the caffeine isn’t out of the system before bedtime, it can result in poor sleep.

Children need more nourishment since they’re in their growth stage. But caffeine can suppress hunger, which causes the children to lay off food items that can help them grow.

Caffeine is considered an addictive substance. Therefore, when kids start taking coffee at an earlier age, they develop an early-age caffeine dependence. This caffeine can come from either regular coffee or caffeinated drinks.

With caffeine dependence also comes the question of caffeine withdrawal. Unfortunately, just like any other addictive substance, caffeine can also cause withdrawal, and it gets even worse for children.

Way #4: Coffee Can Cause Lack Of Concentration

Too much caffeine in the system of a child can cause them to be hyperactive, and they’ll find it really difficult to concentrate on anything, be it homework, class, or even when you’re talking to them.

If a child is already prone to having energy outbursts from hyperactivity, coffee can only make it worse.

Way #5: Coffee Can Cause Calcium Deficiency

Calcium is essential for strengthening bone structure. So to build up strong bone density, a child needs proper calcium absorption. But when they start taking caffeine, the amount of calcium absorbed in the bones is reduced.

Every time you take 100 mg of caffeine, you lose 6 grams of calcium.

Can you imagine a kid liking black coffee, a tasteless, lifeless substance that’s highly bitter? No, and neither can we.

So the next obvious choice is any coffee that has dairy and sugar in it. But those drinks can amp up the sugar count pretty high. Any specialty coffee can come in at over 300-400 calories.

having fun to read should kids drink coffee? Check our piece on can coffee make you sleepy.

Coffee can be highly acidic, and the acidity coming from coffee damages the tooth’s enamel. Enamel is the natural layer of protection over the teeth that you’re born with.

In the case of children, enamel wears off of the teeth more quickly than in adults, which poses a higher threat for cavities to build up.

Children who drink coffee regularly lose the enamel of their teeth faster.

Caffeine is a diuretic that can cause the body to eliminate water pretty fast and cause dehydration. Kids are not fans of drinking water frequently, so the issue can grow severe.

Way #9: Effects of Caffeine on Blood Pressure in Children

Way #10: Effects Of Caffeine On Heart Rate In Children

Reflecting on the previous point, The higher blood pressure comes from an increased heart rate, which was also noticed in the same age groups by US News Health.

What about Caffeine Pills and Powders?

The amount of caffeine in a teaspoon of coffee powder is 2000 mg, equivalent to 20-25 cups of coffee. We don’t even want to imagine the effect they can have on children.

If your child already has caffeine in their diet and you’re concerned about their health, here are a few options you can apply.

Option #1: Keep The Healthier Options Available In The Fridge

When you keep the fridge stocked up with more low-fat milk and water and create a habit of drinking them regularly at home, it will take down the caffeine intake a lot. But you can always bring those drinks in as an occasional treat to encourage this habit even more.

Option #2: Know What Your Children Are Drinking

No, we’re not advising you to spy on your kids. Instead, look up the trendy drinks on the internet, and you should get a clear idea about how much caffeine is in each drink. Not just the caffeine; take a good note of the sugar and fat levels.

Many drinks have several hidden ingredients, so be sure to check for those. If you find something that can cause a potential growth stunt, don’t hesitate to discuss it with them.

If you have a teenager who prefers a cold coffee or energy drinks for refreshment after a long day of school, it’s best to discuss the disadvantages because drinking coffee that late can mess with the sleep cycle.

Option #4: Discuss The Risks Of Over-Caffeination With Your Children

It’s always good to bond with your children over a conversation, and it’s even better when you’re discussing something regarding their welfare. Though ditching that can of red bull might not sound very appealing for them at first, be patient, and it’s all going to work out.

Option #5: Watch If Your Kids Are Showing Signs Of Too Much Coffee Consumption

The most common symptoms of too much caffeine consumption include feeling jittery and having trouble falling asleep at night at the right time. There can also be higher anxiety levels visible, in which case you should keep a watchful eye out for caffeine symptoms and consult a doctor as soon as you do.

Had fun reading should kids drink coffee? You’ll love to read our piece on does coffee stunt growth.

An occasional cup of brewed coffee for your children isn’t a bad thing, as they get to join in on a family fun time. But don’t let consuming coffee stunt their growth potential. Instead, enjoy your family coffee time.

At What Age Should Kids Drink Coffee?

A child can start drinking coffee as early as 4, but the dosage has to be highly moderated.

When Is It Okay for Kids to Start Drinking Coffee?

Though kids can start drinking coffee at the age of 4, it’s better not to introduce them to coffee till they’re adults because early age caffeine dependence can have adverse effects on children’s growth.

How Much Is Too Much Caffeine?

Any amount of caffeine that goes past the safety limits of 400 milligrams per day is harmful.

How Much Caffeine Is Too Much for Children?

Since children are more sensitive to caffeine than adults, caffeine intake past 100mg can be severe.

Any caffeinated drink contains a lot of sugar, milk, and other additives that enhance the overall flavor. Kids love extra sweetness, and it’s easy to understand why they are attracted to coffee or specialty coffee.

Does Coffee Stunt Your Growth?

Is It Possible To Be Allergic To Coffee?