Americano Vs Long Black Coffee – Which Classic Espresso Is Better?

In the battle of americano vs long black, we know these both are popular Espresso drinks among basic coffee lovers. And of course, we are going to compare them today just to determine the winner. … 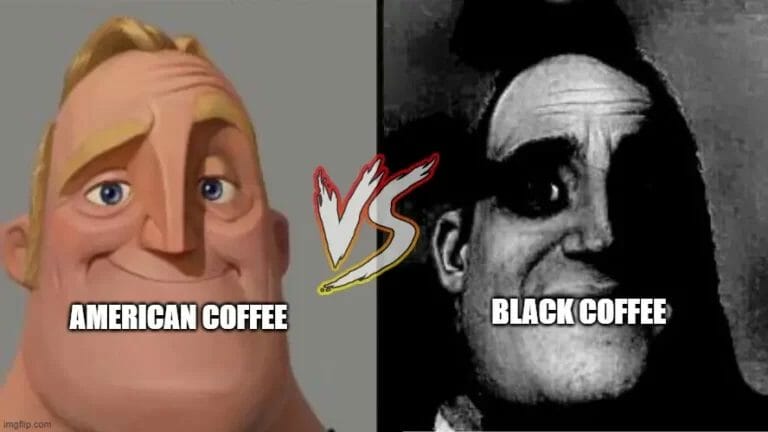 In the battle of americano vs long black, we know these both are popular Espresso drinks among basic coffee lovers. And of course, we are going to compare them today just to determine the winner.

So let’s get started with basic instructions for these Espresso-based beverages before we get into the detailed differences.

What is an Americano?

Americano is a standard Espresso shot that is diluted with hot water. The Espresso shot has a layer of crema on top, which disappears when you add hot water. Since the final cup has no crema, it’ll look like drip coffee or filter coffee.

Does An Americano Have Crema?

Crema in coffee comes from the natural, aromatic oils inside the coffee beans. If the beans are processed right, they’ll contain the coffee oils when you’re brewing coffee.

Crema is a creamy substance that is light brown in color and floats on top of the cup after you brew it. The foam on top of the cup makes it look like the foam you get when you pour beer straight from the tap. In fact, the two look so similar that it’s also known as “The Guinness Effect.”

Crema has been recognized as a mark of a great cup of coffee. But sadly, it’s not as easy as you think. Even when the coffee has crema on top of it, it can still taste sour if there’s CO2 stuck in the coffee.

Since Americano is just pour-over Espresso or Espresso that’s diluted with hot water. It’s safe to say that if it’s true Americano, it’ll have a thinner crema layer.

The first appearance of the Americano makes you think that drip coffee is similar to Americano, but it really isn’t.

You could consider Espresso a faster alternative, which drips coffee definitely isn’t, but the brewing method isn’t the only difference that matters.

Whether you make drip coffee using a drip kit like the Chemex or any other method, the flavor of drip coffee is far more subtle than Americano.

What is Long Black Coffee?

Another drink that is Espresso-based and created to cater to Americans who visit a coffee shop for their morning needs. But it has high popularity in Australia and New Zealand. And no, this is not what you think it is.

The main concept can be called an exact replica of the Americano since all you need is Espresso and hot water.

But the difference comes in terms of mixing. The Espresso shot is poured over the hot water, which leaves the crema on top.

Long Black has a less potent flavor profile than Espresso, but it’s still more robust than a traditional cup of Americano.

Can Lungo Be Considered A Long Black?

The word “Lungo” is Italian, which means “long.” So the name may give you an idea that both Lungo and long black are the same kinds of coffee, but they really aren’t.

Another reason many mix up Lungo with a Long Black coffee is because both these drinks are basically Espresso pulled with water. But Lungo is different because of the amount of Espresso and water.

For a Lungo, you use double the standard Espresso amount and then pull it with more water. As a result, long black coffee is also greater in volume than a Lungo.

The words “Caffe Americano” are Italian for “American coffee,” but the origin of the coffee is far less certain.

Americano coffee was created for coffee lovers who felt overwhelmed by a strong cup of Espresso. American baristas decided to introduce something to the coffee drinkers who want a taste similar to standard American filter coffee. So they pulled a shot of Espresso and diluted it in a cappuccino cup that was full of hot water.

But this doesn’t sound like proper history. So let’s read a short story about the origin of the Americano. Though the story is unconfirmed, it sounds reasonable when you hear it for the first time. Plus, it’s a war story too!

During the Second World War, Americans stationed in Italy were in dire need of coffee to keep their body and spirits up. But Italian coffee was too strong for American soldiers since the usual Italian go-to was Espresso, while Americans used to drink percolator or drip coffee.

Summary: Americano was invented to tone down the caffeine content of the Espresso cause many couldn’t stand the intensity.

But the story doesn’t make much sense since, during wartime in Italy, coffee was subjected to rationing, so the story about American soldiers going out hunting coffee in Italian coffee shops after 1943 doesn’t add up at all.

Since the story describes what a standard Americano is anyway, we’ll take it.

Origin Of The Long Black Coffee

Long Black coffee is more prevalent in Australia and New Zealand, so it’s totally fine if you live in Europe or North America and are unfamiliar with this one.

The first long black coffee was two shots of ristretto. But we all know how strong ristretto is and how someone will react when they drink a double ristretto.

To make it easier for everyone to drink, coffee shops tend to make the coffee more customer-friendly by replacing the two ristretto shots with a single Espresso shot.

Getting excited to switch your daily dose?

Here, learn from our piece on how to switch to black coffee.

The Differences Between Americano & Long Black

Now that we’re familiar with both these drinks let’s look at what sets these two Espresso drinks apart. First, this is not a competition despite what the title may suggest.

Let’s start with the basic Americano. Any coffee connoisseur worth their salt should learn this basic recipe for this regular coffee. And here it is:

And here’s how you brew a cup of Long Black:

When you pour in water first and Espresso later, you can get a delicate crema on top of your coffee as well.

Though it looks like there isn’t much difference at all, the real difference is in how you use the water on both coffees.

Both Americano and Long black coffee have the same ingredients: Espresso and hot water. But the composition of both these drinks is entirely different.

In terms of flavor, Americano is more underwhelming when compared to the Long Black coffee. In addition, since Americano coffee contains more hot water than coffee, it suppresses most of an Espresso’s taste.

The Americano looks like a lighter drink with a thin layer of crema on top from the pouring method. Since Americano has more water added to the Espresso, the drink is served at a larger volume.

The Long black coffee has a slightly darker color tone, but it still has crema on top. The volume doesn’t differ much from Americano either.

This doesn’t exactly count as a difference because both these standard coffees don’t have any additives and are almost zero calories.

Both these drinks taste good with milk and other additives, but since Americano has more water in it, the coffee might feel a bit more stale and lose more caffeine flavor over the process.

If you want to add coffee to your low-calorie diet or plan to take caffeine during intermittent fasting, both these coffee drinks are a great choice.

The caffeine content present in both coffee can change depending on the number of Espresso shots used for both types of coffee.

Robusta coffee beans contain double the caffeine compared to Arabica coffee beans. However, if you use Robusta beans to brew either a Long Black coffee or an Americano, the caffeine count we mentioned might be lower than what you’ll find in your cup.

Had fun reading about americano vs long black coffee?

You’ll love read our piece on macchiato vs cappuccino.

The two coffees are so similar that many avid coffee drinkers sometimes confuse Americano with a Long Black Coffee. But we all make mistakes, and that’s totally fine.

No matter which Espresso-based drink you are a fan of, we hope you enjoy your delicious coffee.

Is There Any Difference in Taste Between the Americano and Long Black Coffee?

The Long Black coffee can give you a more detailed taste of the Espresso since Americano is a more watered-down version with a thinner body.

Where Did the Americano Originate From?

The Americano originated from Italy.

Which of These Brewing Methods Do You Prefer?

I personally prefer the Long Black coffee since you can sense the bold flavor and intense taste of the Espresso on your taste buds.

Crema is a frothy layer of foam that sits on top of the Espresso coffee after brewing.

How Many Shots of Espresso Are in an Americano?

Americano can either be made with a single or double-shot Espresso, but a standard Americano contains a single shot of Espresso.

Macchiato Vs Cappuccino: What’s the Difference?

Matcha vs. Coffee: Is Matcha Better Than Coffee?