Yerba Mate vs Coffee: Which Is The Healthiest Choice?

Yerba Mate has been around for centuries and is a classic alternative for tea and coffee. However, it never got mainstream attention simply because it’s considered more of a novelty herb outside of South America … 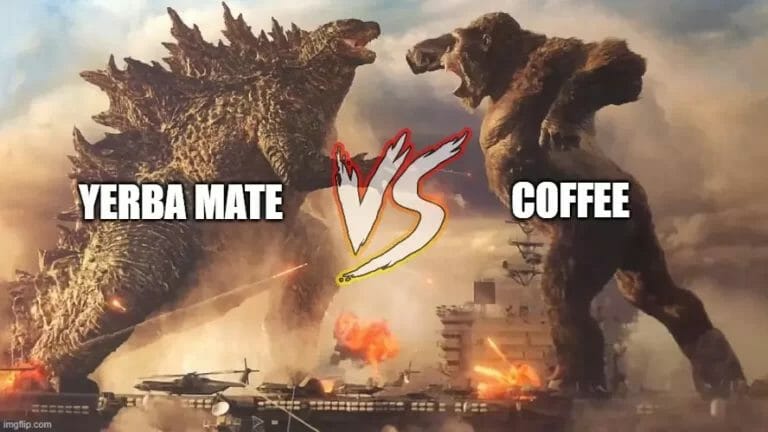 Yerba Mate has been around for centuries and is a classic alternative for tea and coffee. However, it never got mainstream attention simply because it’s considered more of a novelty herb outside of South America than an everyday drink. But how does it compare to the all-time famous coffee? Let’s take a detailed look at yerba mate vs coffee.

What is Yerba Mate?

Pronounced as “yer-BAH MAH-tay,” Yerba Mate (Ilex Paraguariensis) is a shrub that you can find in Argentina, Paraguay, Southern Brazil, and Uruguay. The shrub has high therapeutic properties, along with medicinal benefits.

As a result, The Guaraní Tribe of Paraná has been using this herb for healing for centuries.

How To Prepare Yerba Mate

The steps to prepare a cup of Yerba Mate are pretty similar to making instant coffee.

You can also use coffee brewing methods like the French press or get yourself Yerba Mate tea bags. But if you want the best flavor profile with maximum freshness, take a few leaves and put them in a tea strainer over your mug.

Yerba Mate can also be made into an iced tea-like drink by preparing it and storing it in the fridge. We’d suggest avoiding the premade cans/ bottles of Yerba Mate, as they often contain extra sugar.

Yerba Mate comes with a lot of benefits. So without any fancy introductions, let’s dive right into them.

Yerba Mate contains a lot of antioxidants that uplift your physical condition. The most important one is the effect of slow aging. In addition, Yerba Mate has high counts of Polyphenols, which counteract free radicals in the body and make your appearance glow.

This is the right drink to pick up if you want to look better when you’re past 40.

Yerba Mate is an excellent source of different vitamins and minerals, such as:

These vitamins and minerals help your DNA function properly, renew your cell, and balance the fats and proteins in your body.

Yerba Mate is a diuretic that helps you calm down your appetite. Many dieticians recommend Yerba Mate in the diet for this property.

Yerba Mate contains “Mateine,” which is basically caffeine. With Yerba Mate, you can enjoy all the energy boosts of caffeine without the side effects of caffeine consumption.

According to a study, High counts of Yerba Mate can deactivate the E. Coli bacteria in your system and can cause several infections. It also prevents Malassezia Furfur from growing. In simple terms, this is the fungus that causes dandruff, flaky skin, and rashes.

Though Yerba Mate is assumed to boost the immunity of the human body, there are no studies to prove the point. Still, several vitamins and antioxidants present in Yerba Mate can help secure the immune system.

Research from the Juan Agustin Maza University of Mendoza has proven that Yerba Mate can help reduce cholesterol levels with the antioxidants in it, lowering the risk of heart diseases.

Though there isn’t any human research data to establish this theory, animal research has proved that Yerba Mate boosts the signal for insulin release in your body, reducing blood sugar levels significantly. So, by keeping your blood sugar at safe levels, Yerba Mate helps you prevent diabetes.

There’s also a possibility that Yerba Mate reduces the production of Advanced Glycation End-products (AGEs). These elements cause diseases to progress further in the human system.

Yerba Mate boosts the metabolism rate in your body, which helps you burn through stored fat in your body faster than usual. Due to this property, Yerba Mate is a great assistant for weight loss.

Yerba Mate also suppresses your hunger, stopping you from snacking on food items that can cause extra sugar and fat to pile up in your system. When you’re taking in less fat and burning more, you’re sure to lose weight.

Yerba Mate is highly effective for keeping your digestive tracts clean by removing harmful bacteria. As a result, Yerba Mate is the best help in case of digestion issues. As an added bonus, Yerba Mate can also reduce the risk of kidney stones and UTIs.

The benefits of Yerba Mate are more than what one can bargain for, considering it’s just a drink made of leaves. But even this great drink has its fair share of adverse effects.

If you’re a casual drinker, you have nothing to worry about. However, regular Yerba Mate drinkers may face one of the issues stated below.

Over-consumption of Yerba Mate over a long period can increase cancer risk instead of fighting it.

Consumption of Yerba Mate is recommended while it’s hot. High temperatures in drinks can cause damage to your respiratory and digestive tracts, which increase the risk of abnormal cell growth that leads to cancer.

A set of harmful elements in Mate called “Polycyclic Aromatic Hydrocarbons (PAHs)” are similar to carcinogens found in tobacco. ISo if you’re drinking too much Yerba Mate for extra benefits, you can end up with a possibility of upper respiratory cancer.

Certain chemical contents in Yerba Mate have a high chance of counteracting various medications such as antidepressants and Parkinson’s disease treatments.

The caffeine or mateine present in Yerba Mate can also react to antidepressants and muscle-relaxing medications.

There’s nothing new that can be said about the worldwide renowned coffee drink. Since its discovery by Ethiopian shepherds back in the sixth century, coffee has been going strong worldwide, fuelling the lives of millions as the default pick-me-up drink.

Though we both know them by heart already, let’s take a quick recap of the benefits of coffee.

Caffeine increases blood pressure, a common reason behind a heart attack. But even then, coffee doesn’t increase the risk of developing cardiovascular diseases. This statement comes from Peter Martin, director of Coffee Studies at Vanderbilt University.

According to Peter Martin, director of Coffee Studies at Vanderbilt University, caffeine raises blood pressure but does not help develop cardiovascular disease.

Coffee is not just for picking up your energy levels; it can also improve your mode and reduce depression. So if you’ve been feeling down recently, why not start recovery in small steps, starting with a cup of coffee?

Aside from the claim of help with depression, a Harvard University study has also proved that moderate consumption of coffee can reduce the chances of suicide.

According to a Harvard University study, caffeine affects reducing depression, and its moderate consumption can significantly reduce the chances of suicide.

A study shows that caffeine can slow down the cognitive decline from Alzheimer’s by 65%. As for Parkinson’s disease, consuming coffee can reduce the 32-60% risk.

Differences Between Yerba Mate And Coffee

Now that we have enough knowledge about these drinks, they both sound really similar, don’t they?

But even then, two things set these two drinks apart.

Having fun Nomies? Learn more from our piece on difference between regular and decaf coffee.

As we know by now, the “mateine” present in coffee is basically caffeine. So there’s caffeine in both coffee and Yerba Mate. Though the term was coined by a doctor who said it was a “special type of caffeine,” those are just fancy words. At the end of the day, it’s all coffee.

If you take a regular coffee cup and a Yerba Mate cup, you’ll find that even in caffeine content, they’re really close.

Even when we’re trying to find differences between these two drinks, they’re close. But what really sets them apart?

Both Yerba Mate and coffee contain similar chemical compounds, but they’re still far different. The most common compounds found in both these drinks are:

The compounds that give Yerba Mate an extra edge over coffee are:

Theobromine reduces your blood pressure by dilating your blood vessels and helps your muscles relax. Due to its muscle-relaxing properties, theobromine is a helpful element for asthma treatment.

When theobromine and theophylline work together, the caffeine in your system can boost your energy levels without making you hyper and jittery, which coffee can often do.

Though hundreds of chemicals differentiate both these drinks, the list will be too long, and the discussion will keep going.

But the point that both these drinks are different will still stand.

Had fun reading? You’ll love to read our piece on matcha vs coffee.

In Yerba Mate vs coffee, both are the best-caffeinated drinks you can get your hands on, with Yerba having the upper hand in terms of the advantage it provides. But that still doesn’t neglect all the excellent coffee does for you.

It doesn’t matter if you’re a fan of either; what matters is that you’re getting the best benefits from your daily cup of refreshment.

How Much Caffeine Can You Expect in Yerba Mate?

A cup of yerba mate contains 85 mg of caffeine, which is nearly similar to regular coffee.

Yerba mate is a drink prepared from the shrub’s leaves, which is similar to tea. Though it has caffeine identical to regular coffee, yerba mate is considered tea.

Which Is Healthier: Yerba Mate vs Coffee?

Coffee has its fair share of health benefits, but if you compare the help of the two, yerba mate comes out on top.

When is yerba mate not recommended?

If you are going through pregnancy or are already suffering from an alcohol/ nicotine abuse problem, it’s best to avoid Yerba, mate.

Can you reuse yerba mate leaves?

Yes, you can preserve and reuse yerba mate leaves for a second time of brewing.

Difference Between Regular And Decaf Coffee: Which Is Healthier?