Colombian Coffee: Secret to Its Popularity

Are you into fitness? Cause I can see you trying to fit a whole pot of coffee in your mouth. Which is, of course, when the coffee is from Colombia. If you are a coffee … 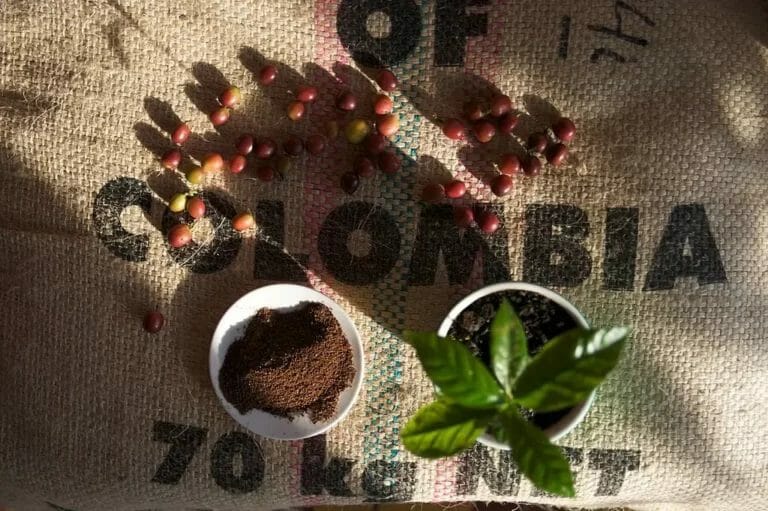 Are you into fitness? Cause I can see you trying to fit a whole pot of coffee in your mouth. Which is, of course, when the coffee is from Colombia. If you are a coffee lover who hasn’t tried out Colombian coffee yet, I recommend doing so right away.

How would you answer the question: which country produces the best coffee in the world?

Colombia’s economy depends a lot on coffee-growing, which has become their national identity. They rank third among the world’s largest producers of coffee in the world, with 12% of the world’s total coffee production under their belt. Also, coffee production is the most significant rural employment in Colombia.

Colombian coffee can be categorized into different grades depending on its quality. Supremo, Extra, and Excelso indicate a quality from highest to inferior, respectively.

There is also the risk of coffee rust and berry borer insects, both of which can affect annual coffee yield by spreading far and wide. As they have already spread on the higher elevations of farming grounds, coffee farmers of the various regions in Colombia are more scared than ever.

The coffee-producing regions in the eastern zone include:

After past conflicts, coffee production is the primary financial support for this region. Colombian Coffee Growers Foundation has started funding and researching for growth among the farmers in the region.

The climate of the eastern region is similar to the northern regions of Colombia, with a bit more rain and humidity.

The south region is close to the equator. There, coffee is grown at higher altitudes. The South region is synonymous with coffee quality. Coffee from the south region of Colombia is known for its indistinguishable cup profile and high acidity.

These 3 regions are considered the pillars of the new Colombian coffee triangle. Narino and Huila are the biggest coffee producers in the south zone. The Huila region received Denomination of origin back in 2013.

All these 3 regions take up 282,000 ha of land, cultivated by 211,000 coffee producers. This zone has smaller farms compared to the other zones.

The south zone has one wet and one dry season only. June to September is the dry season, after which coffee blooms. Rain can start During October and last till May, but harvesting the coffee product doesn’t start till April. The harvesting process continues till June.

The dry season in this region lasts from December to March, and the wet season lasts from April to November. The coffee blooms in March and the final product is harvested in October/ November.

Coffee crops are subjected to higher solar radiation within the Santander and Norte de Santander regions and Sierra Nevada de Santa Marta mountain. Coffee farmers of this region use more shade on their plants to save the coffee crops from excessive exposure to the sun.

The central north and south zone contains the following regions

Antioquia is the second-largest coffee-producing region in all of Colombia. Tolima is the third-largest region for coffee production.

The two zones have two dry and wet seasons

Colombian coffee gained global popularity because of its strong aroma and well-balanced taste. These coffees are large and have a clean, mild taste and a wonderful aftertaste.

The cup profile can be described by medium to full body and high acidity. A cup of Colombian coffee offers a bright, mellow, and lively brew.

The flavor profile of beans grown in different regions of Colombia varies distinctively. Moreover, coffee in Colombia is harvested twice a year. That also contributes to the unique flavors. The coffee-growing regions are divided into northern, central, and southern parts.

Coffees growing in the central zone have fruity, floral, and herbal notes. The fruity flavors include apples, red berries, and tropical fruits. The northern part grows mainly coffee with flavors of nuts, caramel, and chocolates. Whereas the southern part gives coffee hints of citrus and spices.

As we all know by now, Arabica and Robusta are the two major types of coffee beans. Colombia is one of the few countries that produce Arabica beans exclusively. Colombia ranks second in global Arabica production. Arabica beans are widely renowned for their superior quality to Robusta beans.

This superiority gives you a chance to savor a cup of light roast delicacy. Since the beans are born with flavors and do not require heavy roasting.

The Arabica beans offer a cup of sweeter and lighter coffee compared to Robusta beans.

The caffeine content in Arabica is also half the amount of Robusta, meaning you can enjoy a tastier cup when you purchase Colombian beans without worrying about the caffeine amount.

Having fun Nomies? Learn more from our types of coffee beans.

Colombian Arabica beans go through a wet processing method with water. The water separates the cherries from the surrounding pulp of the fruit.

Though a relatively new procedure for coffee cleanup, wet processing allows the farmers to yield a brighter, cleaner and fruitier product.

The best thing about Colombian coffee is its wide range of roasting possibilities. While clenching fingers around cups of single-origin coffee, you crave to explore their original flavors. To satisfy your craving, you need lightly roasted beans.

Lighter roasts help the beans to retain their distinct natural flavors. In a cup of light-roasted Colombian coffee, you can expect to enjoy bright acidity. A medium roast is the best way to enjoy a fresh cup of Colombian coffee.

Why Does It Taste So Good?

Coffee is a sensitive plant. It requires the exact climate and conditions to produce the caffeine goodness. The coffee-growing climate of Colombia is the most perfect in the bean belt area. High-quality coffee trees thrive best here. The geography offers a soil, temperature, and rainfall ideal for coffee plant growth.

The Colombian tropical climate has heavy rainfall (over 200 cm per year). They never witness a temperature below the freezing point. Also, the trees get a mild climate and the ideal amount of shaded sunlight. All of this adds to the richness of flavors offered in Colombian coffee.

Colombia has mountainous landscapes. Near the southern equator, there are high altitudes where coffee thrives the best. So, the finest Arabica beans can slowly ripen and acquire more developed flavors.

Not only the climate, but Colombia also has more than 600,000 skilled coffee farmers. They hand pick coffee cherries and give their best to make our coffee experience remarkable.

So, you finally managed to get your hands on the best Arabica beans on the planet. Time to brew them the right way.

Although there is no traditional style, the beans are suitable to make certain brews memorable. First, you need to identify the degree of roasting and its regional origin.

Colombian beans have high acidity and mild flavor, perfect for espresso brews. The beans are naturally sweet and make a bright, light, and sweet cup of coffee.

Even when they are roasted darkly, there are no worries over bitterness. So, you can enjoy a rich cup of cappuccino or macchiato. Colombian beans are also suited for Aeropress brewing.

Juan Valdez: The Man, The Myth, The Legend

When writing about Colombian coffee, there is no way I’m going to conclude the article before mentioning Juan Valdez in said article. But the question is, who is he?

Juan Valdez may sound very real and a common name, but he is fictional. The image of Juan Valdez represents all of the coffee farmers of all Colombian regions.

The image consists of him standing beside his faithful mule, named Conchita. The image of Juan Valdez is used as a marker to indicate 100%- Colombian coffee.

Juan Valdez has appeared in various TV advertisements, characterized and portrayed by professionals, and is the official mascot of the Colombian Coffee Growers Foundation. Yep, Colombia has an official coffee mascot.

Though honored as one of the three major coffee growers globally, Colombia is recently facing many harsh factors causing coffee production to go down. Climate change is making the ideal coffee environment highly unstable.

Crop yield has not been as per expectation for many farmers. As a result, many farmers have already shut down their farms, and some are still suffering from poverty and famine.

Back in 2018, Colombian coffee had the lowest price in a decade. Farmers were agitated by the pay they received from export. I mean, if you grew a pound of coffee, then someone sold a few beans as a latte for $5 and then handed you $1 for the whole pound, you would be pretty upset too.

In the summer of 2018, the Government of Colombia promised to deliver 100 billion pesos to farmers to improve their conditions, get back up from poverty, and continue their production.

The Government and the CCGF foundation are working together to resolve this issue. So if you are worried about your favorite coffee country shutting down its exports, you can rest assured.

Had fun reading? Check out our piece on what is cascara syrup.

If you crave the world’s best coffee beans, then Colombian coffee is it! Make Colombia your next travel destination and enjoy the bean’s original uniqueness. And don’t forget to make sure that your money goes towards the farmers who worked so hard just to make your morning and your day better.

How Healthy Is Colombian Coffee?

Is Colombian Coffee the Best in the World?

The coffee taste is a personal preference. In general, Colombian coffee is among the coffee luxury. The beans are famous for their high-end quality, rich flavor, and delightful taste.

The first factor contributing to the goodness of Colombian coffee is the environment. And the second factor is skilled coffee farmers. More than 600,000 families in Colombia depend on coffee growing. They collect the sweetest and most ripe coffee cherries with their outstanding handpicking skills. As a result, we get a remarkable coffee experience.

How Does Colombian Coffee Taste?

Colombian coffee is globally famous for its strong aroma and well-balanced taste. A cup of Colombian coffee has a mild and clean taste with a beautiful aftertaste. The cup profile can be described as a bright, mellow, and lively brew. It has a medium to full body and high acidity.
Colombian coffee has distinct flavors depending on the regions where they grow. Colombia has two harvest seasons in a year. While most of the other countries produce coffee only once a year. This, too, leads to the uniqueness of flavors of Colombian coffee.
Generally, the coffee from central Colombia has herbal, floral, and fruity notes. Apples, red berries, and tropical fruits are a few examples of Colombian coffee’s fruity flavors. Northern Colombia is famous for growing coffee flavored with caramel, chocolate, and nuts. On the other hand, the southern zone grows citrusy and spicy coffee.

What Are Some Famous Colombian Coffee Brands Available in the Market?

No. Colombian coffee contains a similar amount of caffeine to Arabica beans of other origins. Many factors influence the final caffeine content in a cup of coffee, including roast profile, type of bean, grind size, and brewing method.
In general, Robusta beans contain a much higher caffeine level than Arabica beans. The caffeine content of Arabica coffee is about half that of Robusta coffee. The Arabica variety is also superior in quality and taste to the Robusta variety. And we know that Most Colombian coffee is of the Arabica variety. Therefore, they contain lower caffeine than cheap Robusta blends.